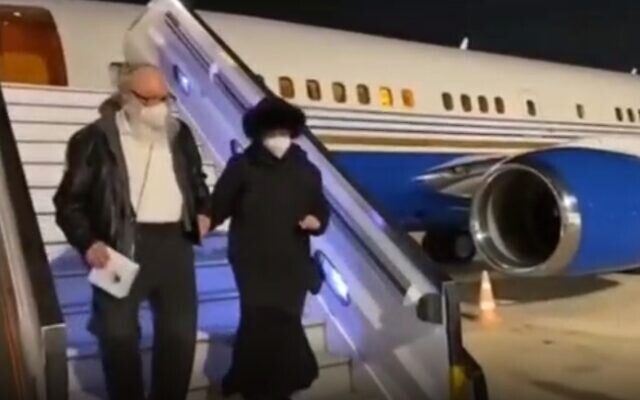 This morning, under the news radar, Jonathan Pollard arrived in Israel. Accompanied by his wife Esther, he flew in a private jet (obviously donated for the cause) to Israel. Landing in early morning darkness, he was greeted by Prime Minister Netanyahu.

For anyone who has followed and sympathized with Pollard’s long journey, watching him walk down the steps of the plane, kiss the ground and receive his Israeli identity card from the Prime Minister, it was  poignant. Despite the crime he committed, it seems to be common wisdom that he was singled out for extraordinary punishment far exceeding that of others convicted of similar crimes.

After serving close to 3 decades in American prisons, Pollard was then required under the terms of his parole to live an extremely limited life for five years in New York City.

But this is all past and he and his wife are now taking part in the uniquely 2020 ritual in which all arrivals to Israel must participate: quarantine.

Once this is all over and Jonathan settles into a more normal life, I hope that he will write a book where he shares his experiences. It will be interesting to read about his being arrested at the entrance to the Israeli Embassy in Washington, DC or his plea bargain which was not honored. However, I think it will be most interesting to read about how Jonathan dealt with his long prison sentence. How did he get through the daily grind in jail (what was the daily grind?)?  Did he have relationships with other prisoners or the prison staff? How did he observe Shabbat and holidays? What kept him going? What was it like to walk of the prison gates a free man? What were his first observations from being in the open world for the first time in decades? There must be scores of small and great dramas, victories and defeats which Pollard experienced.

I think many await hearing from Mr. Pollard. Let’s hope he shares his experiences in writing.